Location » Getting up the Mountain

Getting up the Mountain

Raise is about an hour's walk from Glenridding Youth Hostel, for someone who is physically fit (but up to double that if the snow is deep and you are carrying boots and boards...). You should be equipped for a mountain environment before embarking.

Please refer to O.S. Map English Lakes 1:25000. N.E. Sheet before setting off and bring a compass – particularly useful for finding your way back down to the chimney if it clouds over. Raise (343175) is reached from Glenridding (386169) via Greenside Mines (365174). On reaching the mines follow the footpath for Sticks Pass, up the steep hill to your right.

At the top of the zig zags after making a right turn under a rocky outcrop (Stang End) and reaching some wooden sleepers across the track (if they're not covered by snow) you will see on your left a steep banking (see screen grab below). This is the old lead-smelting chimney: follow this for around 20 minutes until you reach the remains of the chimney stack. About 200 metres past this, traverse Raise to the right (don't believe the Google pic above - there is no path but you should see a stick in the ground as a marker for where to start traversing) and you will eventually come to the ski slope tucked away at the head of the valley.Take care on the last section if the snow is hard as a fall and slide could pitch you onto rocks (members have been injured here).

When reaching the area you will find the club hut (345177). Raise can also be reached from the west by a footpath from the Thirlmere side.Depart from Stybeck (318189) at the junction of the A591 and B5322.Take the footpath for Sticks Pass.When reaching the top of the pass (343183) the tow is in a south easterly direction approx 140deg SSE.This route is slightly further and steeper than the Greenside approach but can offer excellent sliding back down.

Do not rely solely on Googlemaps or GPS devices and be aware that cloud can descend suddenly making visibility very poor. If this happens, it can be easy to stray off the route if you do not have a map or compass.

Inexperienced Skiers /Boarders should not attempt the climb unless accompanied by someone who is familiar with winter conditions and can navigate in white-outs, or knows the area well. In icy conditions crampons are strongly advised when traversing steep slopes.

Below: map and aerial view of the walk up from the car park. In the pic both the car park and tow are out of view - the tow is just below the skyline. Be sure to make the final turn back to Stang End (marked in green on the pic) and the left turn up the steep bank just after this. Otherwise you will double your walk time (more if it's very snowy and you're floundering through drifts...). On the pic you can see the two tracks which often sucker first-timers into the long detour round the valley... 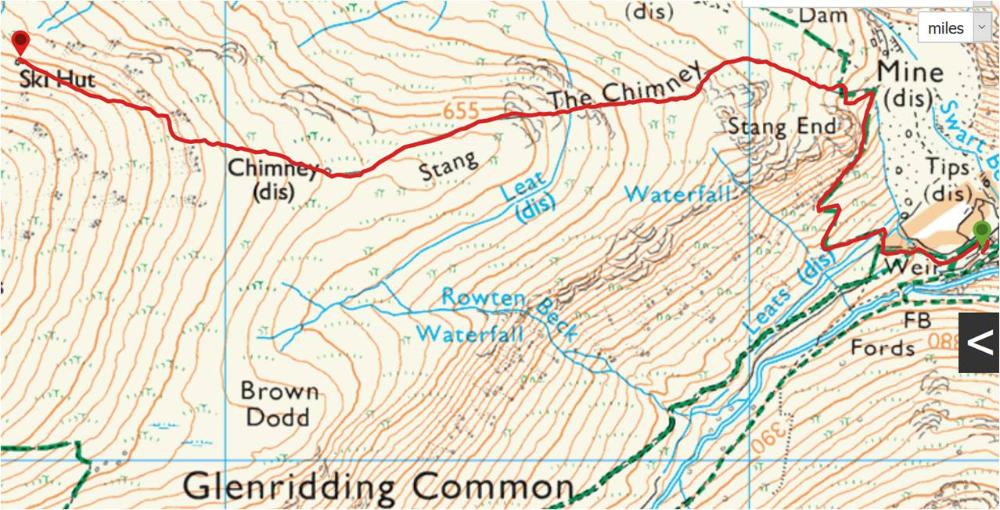 Walk up from our car park near the Helvellyn YHA

Aerial view of the walk up
Tweets by ldscwebcam